Way back in 1994, Nostalgia enthusiasts Roy Wilding and John Guthrie envisaged an organisation to unite people who raced nostalgia slingshots, altereds and dragsters on a budget, where they could compete with each other on a level field, where expensive parts and big sponsors made no difference to the competition. 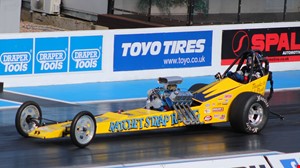 They contacted other interested racers across the country, and a committee was formed with Roy as Chairman and John as Secretary. This was joined by Mark Fryer, Chris Hartnell and Simon Miskelly, with the club initially including a few dozen other members. The organisation was originally to be called S.A.D. (Slingshots, Altereds and Dragsters) but luckily this was quickly changed! And “The Wild Bunch” was born, running a partial season in 1995. There were some trophies in the first year in the form of three Merit awards, but the first full season and Wild Bunch Series was held in 1996, with the inaugural winner being Roy himself in his “Chariot of Fire” Buick-powered slingshot.

From the beginning of 1996, The Wild Bunch Drag Racing Club operated on a non-profit budget from ‘donations’, initially of £2 per team per event, collected by Treasurer Claire Meaddows. This covered the cost of event trophies. A couple of years later, a £5 yearly Registration fee was also introduced to cover expenses, and nowadays the event ‘entry’ fee stands at £5, with annual Registration £20, and this covers all our expenditure. 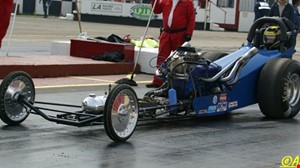 In the early days, The Wild Bunch only ran Run-What-You-Brung type events, but this soon changed, to also include MSA-sanctioned events (formerly known as RAC-MSA). For the first 9 years, the format of the events at Run-What-You-Brung weekends was to run as a time trial, 'against-the-clock'. Teams selected a 'Dial-in' time, and attempted to run as close to this as possible over 4 rounds, with no penalty for 'breaking out'. The winner was the one who got closest as a percentage to their Dial-in time over the rounds completed. For the first few years, Pete Dickenson was in charge of Timekeeping and Race Co-ordination, up until 1998, when Claire Meaddows took on the role.

After the first few years of using the RWYB method at (then) RAC-sanctioned events, the Wild Bunch adopted a bracket-style of eliminations (followed by most Sportsman classes in the UK) for all MSA events, and since then have run staggered starts on a Pro Tree, over a Sportsman elimination ladder, with breakouts and red lights meaning elimination. 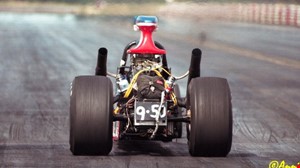 There have been a few changes along the way, as the club adapts to suit circumstances, and for the 2005 Season onwards, the Wild Bunch’s basic RWYB format changed, with the introduction of the ‘DRAG’ system (suggested by Dean Smythe), still a ‘time trial’, but now the winner is the one who records the lowest average of the difference between E.T. and Dial-in over all rounds completed, which more rewards consistency to Dial-in.

Since the first fledgling years, The Wild Bunch Nostalgia Drag Racing Club has grown, and gone from strength to strength, with around 50 active members most years, and dozens more on the books. At the end of 2001, Roy retired as Chairman after founding the club and steering it through its infancy, and a new Chairman was elected for 2002, ‘Crazy’ Chris Hartnell, owner/driver of the “Backdraft” slingshot, who together with partner Claire Meaddows oversaw the running of the club until the beginning of 2015, when he retired as Chairman. Since then, Claire has been the General Manager of the club, running it with the Committee. The current longest-standing committee member is Mark Coulsell. Tony Smith was a long-serving past member, as was the late and hugely missed Scot Durrant. Other members have been Sid Slattery, Angi Wilding (Secretary), Sarah Howells (Secretary), Andrew Willcox, Barry Bohannon, Ed Yates, Dean Smythe & Steve Field. Current committee members joining recently are Dave Williams, Mark Hartnell, Lynne Coulsell (Secretary), Bob Hawkins & Steve Cassisi. We thank them all for their invaluable support and contribution to the club. 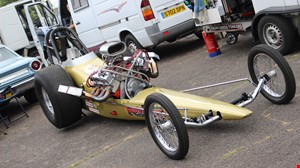 In the first two decades and more, the class has come a long way and have regularly run both MSA and RWYB events at Shakespeare County, Santa Pod and York Raceways, making it a truly national series, with up to a total of 12 events campaigned in many years. In 2018, with the very sad demise of Shakey, and York Raceway hopefully awaiting development, there are 8 events, all held at Santa Pod. Even though many cars are historic, MSA-event racers keep their cars up-to-date with the latest chassis and tech and safety rules, whilst still maintaining as much of the integrity and originality of the car as possible, and keeping Nostalgia very much alive. 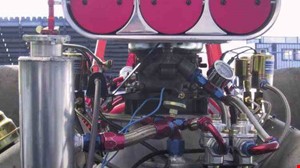 Amongst the Wild Bunch there is a fantastic friendly, family atmosphere and the camaraderie and team spirit are evident to all, as well as the friendly rivalry and competitive nature in the pits! All the ‘Bunchers’ help each other out when needed, and also enjoy the competition.

The Wild Bunch like to celebrate all the achievements of their members with an annual Dinner Dance and Prize Presentation, and have numerous Merit Awards initiated over the years. There were just three awards in 1995: the “Best Newcomer”, “Best Turned Out Team” and “Best Achiever” awards. More merit awards were added throughout the years, including the “C&C Sportsperson”, the SAG’s “Personal Achievement”, the “Perseverance” award, “Best Slingshot”, “Best Altered” and “Best Radical/Dragster” trophies and the “Derek & Brenda Annable” award amongst their number, as well as awards for “Quickest E.T.” and “Fastest MPH” of the season and “Quickest British engined car”. More recent trophies have been the “Crew of the Year” award, the “Crazy Chris Showmanship” Award and the “Scot Durrant Above & Beyond” award. A legacy introduced by Roy back in 1996, was the “Don Garlits ‘Spirit of Drag Racing’ Shield”, an award renowned as the highest accolade in British Nostalgia Drag Racing. ‘Sounds OK to me’ was the endorsement on the letter by the great man himself. The shield stands for sportsmanlike values and virtues, dedication, achievements and the spirit of Nostalgia, and is a great honour to those who win it, who often include entire teams. 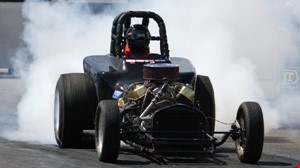 We are extremely proud of our club’s history, as well as that of our race cars. And keeping up the chronicling of the story have been some great newsletter writers, including Ron Fisher, Paul Bland, Mark Turton, Sarah Howells “Against the Clock”, Gina Rumble “Wild Times” and Josh Coulsell “Trackside Torque”. Also providing current and past information, photos, team pages and an interactive section is this excellent website you are reading, developed and maintained by webmaster Ed Yates. For lists of all the Wild Bunch Winners throughout the years, see the RESULTS page, and for write-ups of individual events, see EVENTS, and for photos, see GALLERY.

With new members joining all the time, old teams rebuilding, and many teams stepping up in performance and appearance all the time, the future is sure to be as exciting as the past. So here’s to the future of the Wild Bunch Nostalgia Drag Racing Club!